Leon Wyczółkowski – painter and graphic artist – was born in Huta Miastkowska, a little town located in Garwolin Poviat, on April 11, 1852, calculating in accordance with the Julian calendar binding at that time, in the Russian section of partitioned Poland. However, in the Kraków archive of St Florian’s Parish one can see the certificate of marriage to Franciszka Panek solemnised in 1916, which shows April 24 as the date of the artist’s birth. This document was issued based on the Gregorian calendar used in most European countries at that time. 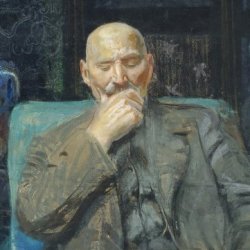 Leon Wyczółkowski attended the school in Kamionka near Lublin and the middle school in Siedlce. In the years 1869-1875 he studied at the Warsaw School of Drawing and Painting under Wojciech Gerson’s guidance, in the years 1875-1876 he continued his studies at the Academy of Fine Arts in Munich at the studio of Alexander Wagner. Next, he studied at the Kraków School of Fine Arts at the studio of Jan Matejko (1877-1879). In the years 1879-1880, he lived in Lvov. In 1881, he returned to Warsaw, where, among others, he conducted classes in a private school of painting. In the years 1883-1893, he stayed in Ukraine and Podolia. In 1895, he was appointed a professor of painting at the Kraków School of Fine Arts. In Kraków, he lived till 1929. In 1921, Leon Wyczółkowski donated the Wielkopolska Museum of Poznań a considerable collection of works of art and handicraft, numbering 179 inventory items. For the donated collection, Leon Wyczółkowski was given financial compensation from the Ministry of the former Prussian District, for which he bought a manor house in Gościeradz near Bydgoszcz.

Near the end of his life, in the years 1934-1936, he was the head of the department of graphic art at the Academy of Fine Arts in Warsaw. He died of pneumonia on December 27, 1936. In accordance with his last will and testament he was buried near his beloved Gościeradz – in the parish cemetery in Wtelno.

On April 8, 1937, the artist’s widow Franciszka Wyczółkowska donated to the Municipal Museum in Bydgoszcz, in accordance with her husband’s will, a collection of his works – oil paintings, watercolour paintings, pastels, drawings, graphics (in total 942 items), as well as memorabilia, furniture and equipment of his atelier, which originated a monographic collection devoted to the artist’s life and works.

In December 1937, a year after the artist’s death, a committee for the construction of Leon Wyczółkowski gravestone was established. Marshal Edward Rydz-Śmigły became the committee’s chairman, and professors of the Academies of Fine Arts in Warsaw and Kraków, and the Stephen Bathory University Faculty of Art in Vilnius – its delegates. The idea was to construct a gravestone from one-złoty contributions of artists from all over Poland. A competition for the gravestone project was announced, and the deadline for sending in projects was June 1, 1938. The project of sculptor professor Tadeusz Breyer was selected and implemented. Due to the lack of funds from contributions and donations, the order could not be made at a stonemason’s shop. The case was taken over by Bydgoszcz mayor Leon Barciszewski. He handed over the documentation and commissioned the famous Stonemason’s Shop of Piotr Triebler in Bydgoszcz to make the gravestone. It was finished in September 1939.

In May 1943, Franciszka Wyczółkowska – the artist’s wife was buried in the sepulchre.